What’s up with the stalk (Conestoga)

At the first robomagellan I attended I noticed that many of the entrants had their digital compasses mounted on a stalk. This made a lot of sense to me because you want to as much as possible isolate the compass from large chunks of metal and magnetic fields. However along the way I realized that there was a downside to having a tilt compensated digital compass on a stalk. The problem is that the tilt compensation is done using “mems” accelerometers. If the compass is being whipped around while the robot is moving the accuracy of the compass can be affected. So along the way I designed a stalk for conestoga that is damped so that it will move but does not whip around. I did this by mounting the base of the stalk in a thick rubber sleeve and adding a about a pound or so of cement (yes cement) into pockets milled into the assembly at the top of the stalk where the compass and gps are located. 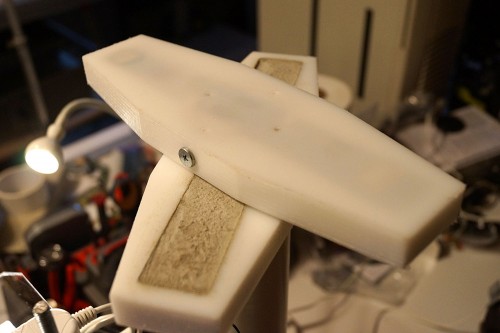