Up And Running. News At Nine.

Finished my DLP 3D printer. Got a good print on the second run! 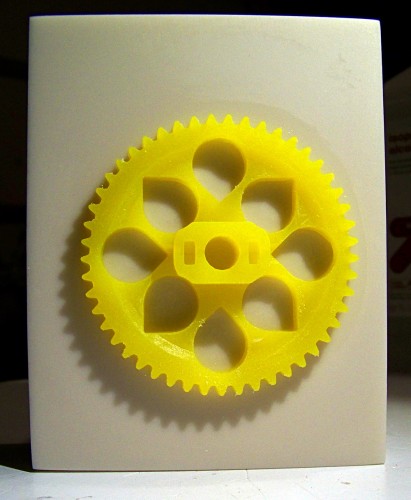 All dressed up and ready to go: 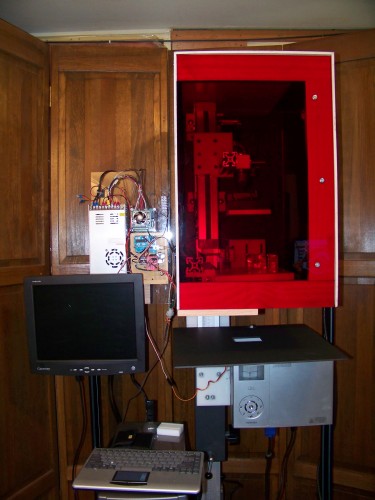 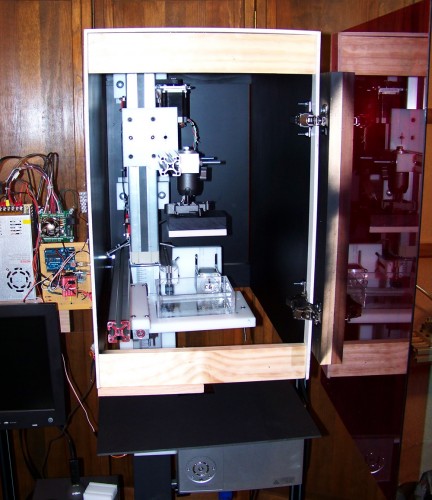 On the first print run I heard the vat snapping away from the corian build plate on the first several layers when it tilted, then I noticed that the part I was printing was only partially attached to the build plate and was hanging down. I stopped the printer at that point and removed the build plate to take a look at the print. It was a bit of a mess, it was apparent that the whole face of the print was no longer touching the sylgard 184 vat floor probably because pieces of the print had broken off. At first I thought that maybe I had an exposure problem but that seemed to not quite cut it as an explanation for what was happening.

Remembering the snapping sound that I heard when the first few layers were exposed I began to think that the vat was tilting too fast not allowing enough time for the vacuum between the newly exposed layer and the vat floor to break. I decided to slow the vat tilt and add less “ramp” to the acceleration of the vats tilt motor. This has the affect of both slowing the vats tilt and making the vat tilt very slowly at the beginning of the tilt then speeding up as the tilt progresses.

After setting up and starting the second print run I noticed that from the sound of the vat tilting the part on the build plate did not seem to be sticking at all, as a matter of fact there seemed to be no resistance to the part separating from the vat floor.  That could mean only one of two things was happening, either the print was stuck to the vat floor or it was stuck to the build plate. Soon the part began lifting out of the polymer and it became apparent that the part was being printed just fine. After the part was finished printing I removed the vat and after emptying and cleaning it I found the sylgard 184 vat floor was still in perfect condition with no signs of wear or damage.

Note: The print was made with a white light projector not the uv.