I haven’t posted for a while even though I’ve had a couple of projects going. Much of the reason for this has been a combination of my day job which is setting up and maintaining dental office computer systems and the somewhat surprising response to my offering the LittleRP flexvat for sale on the website (I have sold about 150 of them) and the equally surprising response to selling FEP for DIY flexvats ((I have sold over 1000 feet of 12″ wide FEP). The combination of these things ate a considerable amount of my free time.

I have for some time been wanting to upgrade the design of the LittleRP vat and also create a larger more generic vat. The original “masters” for the LittleRP vat were made on a Prusa I3 type of printer that I built specifically for creating the masters . Over time I came to see the limitations of that printer event though I was able to create the masters I needed for the original version of the vat. The two issues I ran into with the prusa printer were the limited build size and the generally rickety nature of the printer that led to all kinds of artifacts in the 3d prints.

When I decided to update the vats I also decided to update the printer that I used to make the masters. I wanted a printer that would produce a high quality surface finish which meant the printer needed to be very rigid to have zero wobble or ringing on any axis, have very high dimensional accuracy and have a large build area with a heated bed, I also wanted it to be a general purpose machine that would do both 3d printing and cnc routing. It was looking like it was time to do some reasearch and spend some quality time on ebay.

I lean towards the pile of parts method of building machines, I decide what I want to build how I want to build it and then I start ordering parts. Once the pile of parts is about equal to the machine I wanted to build I start assembling it. I did not want to construct the linear slides myself (been there done that) so I decided to look for some good used slides. I was able to score high quality heavy duty linear slides for the x (30″), Y (20″) and Z (8″) axis for a good price. I ordered a controller (Rumba), motors (low inductance 560 oz in NEMA 34’s) on the x and y axis, 240 oz in NEMA 24 for z, step motor drivers (7A microsteppers for the nema 34’s) and power supplies (2-60v @ 7A, 1-24v @30A) timing belt pulleys and belts, aluminum extrusions, hot ends, sensors, spindle kit etc., etc. After getting the pile of parts I move to the “boil, boil, toil and trouble” phase. Make misc. parts, bolt it all together wire it turn it on run it, find what the problems are repeat until it works as needed.

As a 3d printer the “Thing” works great, really nice 3d print quality (after some serious tuning). It’s not a speed demon, the nema 34 step motors are capable of driving the slides at very high speeds but I run it at 40mm/sec because there is a lot of mass moving around with the heavy duty slides, at high speeds the Thing stays nice and rigid but the table it sits on moves quite a bit (doesn’t affect the print, it’s just very unnerving to watch). I am using Marlin firmware on the Rumba controller and Craftware for my slicer together they make for very good 3d printing.

As I mentioned I built the Thing to be a general purpose machine capable of cnc routing so I constructed the 3d print head in such a way that I can remove it by unscrewing two bolts and unclipping some connectors. I can replace the 3d print head with a 400 watt ER11 collet spindle. All of the power and control circuitry is installed for the spindle I just have not had the time to machine the spindle mounting plate yet (pretty much just a 3/8” aluminum plate with 8 holes)

When I get some time I will get into more build detail until then meet the Thing: 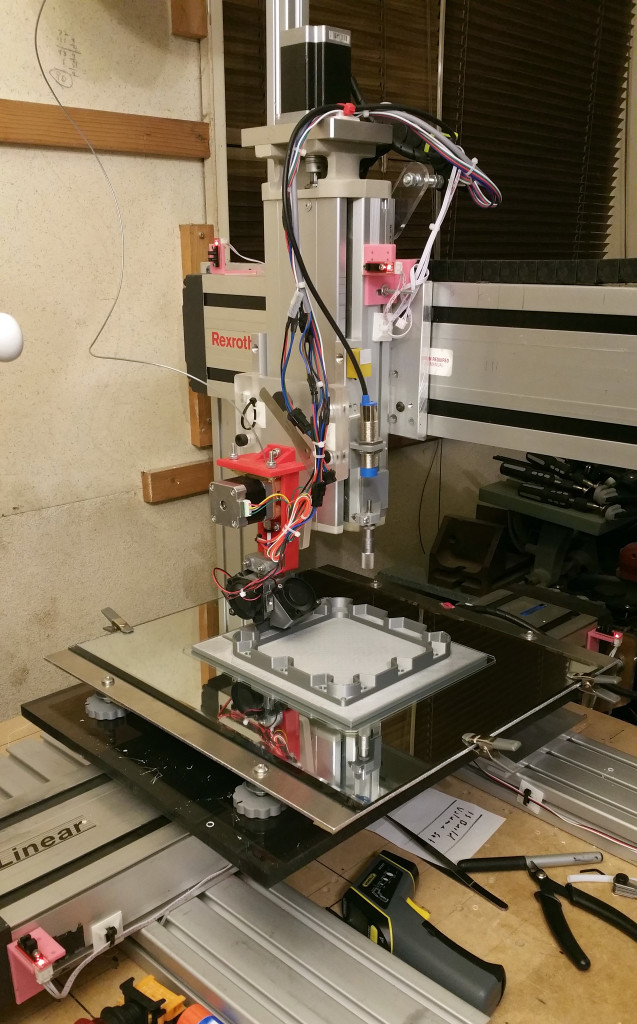 This entry was posted in 3d printing, CNC. Bookmark the permalink.