It’s been a little while since I posted about my 3d printer build (summer has that effect) but that does not mean I haven’t been working on it.   CLICK HERE FOR VIDEO 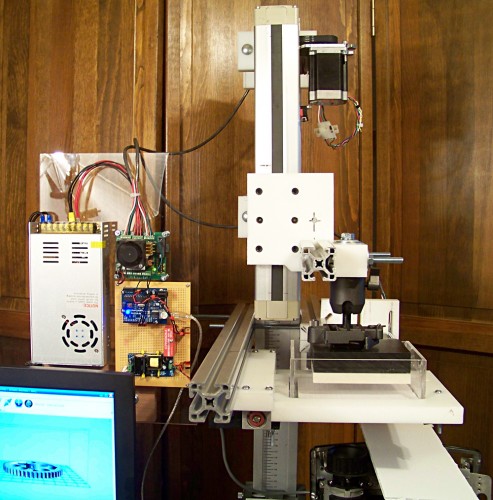 It seems as though a simple mirrored funnel is “good enough” to channel the light from a 20 watt uv led into a dlp projectors light tunnel. 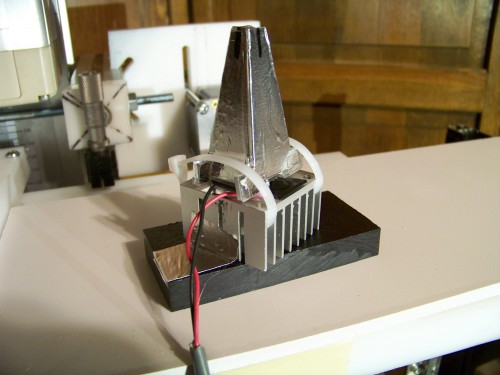 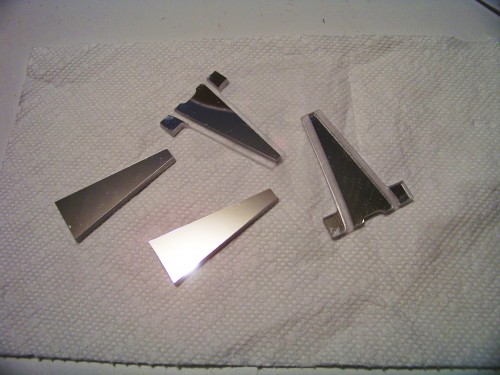 The light funnel is made from mirrored plexiglass that I machined on my cnc router. To be able to use the plexiglass mirrors “front surface” I dissolved the backing off of the mirror using a weak solvent (one that does not also dissolve the plexiglass). The assembly is glued together to form a funnel that fits over the uv led. I also wrapped the funnel in aluminum tape to stop light leaks. The mirrored funnel also serves to hold the led onto the heatsink. I had previously tried using a solid tapered acrylic rod which worked but had fabrication and light loss issues.

The opening at the end of the funnel is about 1/8″ square which is smaller than the opening to the light tunnel on both the dell and casio projectors I have. It also seems that the dlp projectors light tunnel and internal optics do a very good job of “smoothing” the light entering the tunnel before it hits the dlp chip.

The good news: I did a quick and dirty test to see if a 20 watt 405nm led was enough to harden photopolymer in a reasonable amount of time. It appears that it is. I took some uv cure casting resin spiked with a bit of BAPO exposed it for 10 seconds with the dlp projector and it hardened into the projected pattern. This leads me to believe that when I test with resin made for 3d printers the exposure time will drop considerably. I have ordered resin from makerjuice.com that seems to be quite sensitive to 405nm uv (I may order a 395nm 20w led at some point, the sensitivity of the makerjuice resin almost doubles over that 10 nm difference according to the data sheet).

More build details and info to come over the next several weeks.