This sort of thing pisses me off.

Yesterday I read this:
16-year-old-girl-arrested-and-charged-felony-science-project-mistake

TWO FELONIES AND EXPULSION FROM SCHOOL.

When I was in high school for one of my science fair projects I strung 4 12 volt automobile storage batteries together in parallel and ran all that power through a couple of carbon electrodes and shot a thin stream of air through the resulting arc (They call those plasma cutters these days) it wasn’t a perfect experiment (as a very good physics teacher pointed out) but it was a damn good show. It was a project that I now realize was quite dangerous but there were a lot of science fair experiments back then that I’m sure would be seen as hazardous these days, but you know what, people who did those sort of things built the future you’re living in now. The curious sort of people that do things like build robots and 3d printers (and potato canons) did it and whether you think so or not they did a pretty good job.

However, I’ve seen this movie before. Some times it’s over the top as in the case of this teenage girl, some times it’s more (or less) subtle:

In my senior year of high school I took standardized tests like everyone (act/sat) and had very high scores, very high. When I sat down with my “official” school counselor I was told that with scores like that I would do just fine working on the line at Allied Tube (basically factory manual labor). I did not take his advice.

These attempts to shut down the future for some kids happens more than you realize and it needs to stop. I’ve seen very bright kids lose that light because of this sort of thing and it needs to stop. I don’t expect the people reading this post to all of a sudden rush out and change the world but I have seen what people of good will doing what they can when they can are able to do over time.

My daughter is graduating from college next week with a PharmD (Doctor of Pharmacy), her best friend from grade school is a marine biologist, her mother is an environmental engineer, my young niece wants to be a doctor. All are/were intelligent and curious teenage girls just like the young lady that was arrested. I wonder how they would have fared going to school in Polk county Florida.

Am I optimistic or pessimistic in view of the appalling arrest of this teenager you decide:
When I was 4 years old my mother took me to visit my great, great grandmother who was 104 years old, she was born a slave in this country prior to the end of the Civil War. My daughter is graduating as a Doctor of Pharmacy next week. That’s what I’ve seen in one lifetime. Am I optimistic, you bet I am but I also know that I have to do what I can when I can to make sure things continue to improve. I also know that killing our kids initiative or throwing them in jail at the drop of a hat is not a road to the future I would choose.

Charged with two felonies and expelled from school. 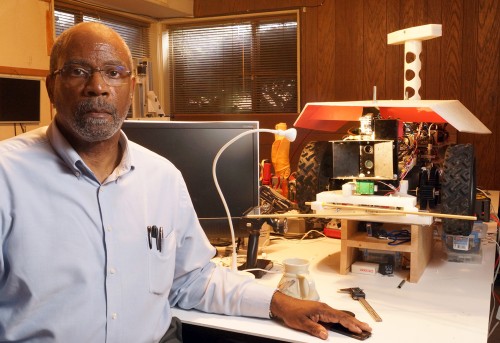 Me And My Robomagellan Robot Conestoga

Here is a link to one of a number of petitions asking that charges be dropped against Kiera Wilmot.

This entry was posted in Un effin believable. Bookmark the permalink.