So far so good. I took conestoga out today for some test runs and it hit the gps waypoints like clockwork. On the first run I set the waypoint precision to 3 meters (e.g. if within 3 meters of the goal waypoint get the next waypoint and continue). It did so well at 3 meters on the next run I reduced the waypoint precision to 1 meter and it again hit the waypoints with no problems. I had very good gps fixes, up to 10 satellites with a HDOP (Horizontal Dilution of Precision) in the 70’s (it doesn’t get any better than that). I did noticed that conestoga would slightly “waddle” while seeking a waypoint, this indicates that I should lower the steering PIDs P parameter to lessen the steering overshoot, I will probably also add a bit to the I parameter (it was set to 0 as was D) which has the effect of increasing the amount of steering correction over time, this will allow me to under damp P and use I to “finish” the steering correction. The waddle could also be caused by the wheel PIDs overshooting, the fix would be similar to the steering PID fix. Conestoga has several PIDs that interact, the right and left wheel PIDs control the overall speed (conestoga should maintain it’s speed on any terrain or reasonable slope), the steering PID which is fed the difference between the goal heading and actual (compass) heading, the cone finder PID which gets it’s correction information from the forward facing “cone finder” camera software. There is also a PID for centering conestoga on sidewalks.

In the previous Robomagellan I had a problems when I would start a run without a good gps fix. That won’t happen this time, I added a 4 line lcd to conestoga that gives me the state of the gps fix plus compass heading (for adjusting the stalk compass) and battery state (volts and current). I also moved the doppler microwave (for collision avoidance) up above the cameras so that grass does not set it off. I still have some testing to do with the collision avoidance system (pretty much just verification that the collision sensors work under varied conditions and combinations of the sensors tripping). I also have to “tune” and verify the cone approach/touch routine. 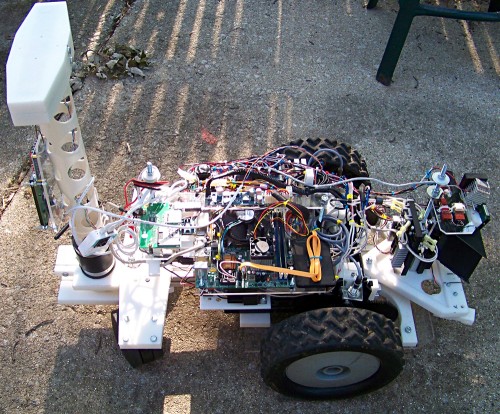 That’s about it for now.