I think that the casio xj-a140 (purchased cheap without the blue leds and heatsink) may be one of the better dlp projectors for dlp based 3d printers IF you plan to modify it for use with a high output uv led or led’s. If you would like to use it unmodified move on there’s nothing to see here. There are two modifications that need to be made to this projector one is to the pc board so that the dlp chip responds to vga or hdmi inputs regardless of whether the original led/laser light sources are present the other needed modification is adding the uv led light source.

PC board mods:
The first modification (thanks to the folks over at www.photonlexicon.com) basically makes the projector ignore the fact that none of it’s own light sources are connected. This allows you to install your own led light source (this is a led projector and I do not think light sources other than led’s would work very well, I don’t think the projector was made to handle high temperatures). The modification is pretty simple: find connector CN905 and jumper traces 4 and 9 together (there are test point type pads behind the connector that you can use). That’s it. The up side is that that’s all you have to do, the down side is those pads you have to jump are small, really, really small. If you are comfortable soldering very small stuff have at it, if not maybe it’s time to start hanging out with people with really good soldering stations and steady hands.

Notes:
You only need to jumper CN905 traces 4 and 9 together. You do NOT need to cut the CN905 cable in any way.
I used a short length of solid wire from a piece of cat 5 cable to jump the traces.
If you take the access door (bottom of unit) to the led assemblies off it will release a limit switch that will make the modification seem to not work, either leave the door on or cut the limit switch wires and short them together (the switch is normally open). 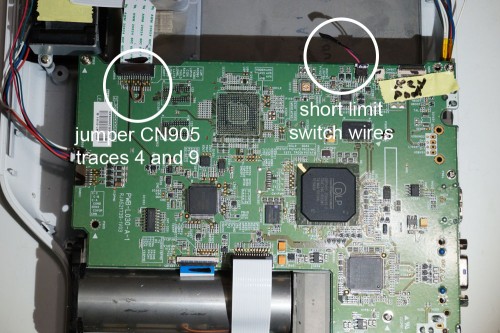 possible uv led mods:
The second modification is to the light path. The light path of this projector is a study in modern engineering. Consider this, you need red, green and blue light bouncing off of the dlp chip to give you a full color image yet the projector only has red and blue led’s/laser’s. Green is produced by the “color wheel” which instead of filtering white light fluoresces green when a part of it is illuminated with blue light and sends the green light back into the projector optics to the dlp chip. It uses a complicated set of dichroic beam splitters, mirrors and lenses to accomplish this. The light path in this projector is complex to say the least (look up a diagram if you get a chance). However, I don’t need all of the sophisticated optics all I need is a light path directly into the “light tunnel” for one color: uv.

I initially considered mounting the 20w uv led on the existing “red” led heat-sink and mounting that heat-sink with a custom fabricated face-plate/lens-holder in the same position that it was originally in and using optics and mirrors to have the uv light make the 90 degree turn into the light tunnel. After having removed the entire lens/dlp assembly I think that doing it that way would be harder than need be and not as efficient as I would like. What I think I will do at this point is still re-use the the red led’s heatsink/peltier and fabricate a face plate but mount the assembly so that it points directly into the projectors light tunnel.

I may not even need to have a lens on the face-plate just a sort of short tunnel (to prevent light loss) and a way of sliding the assembly towards and away from the light tunnel for focusing. The light tunnel itself has a lens in front of it that looks like it will do the job of focusing the uv light source down to the size the tunnel needs depending on the distance of the uv light source (the tunnel is a mirrored box roughly 1/4″ in square and 2″ inches long). I will have to raise the pc board that covers that area by using standoffs so that I can fit the heat-sink assembly and fan where I want it I will also need to make a mount and face-plate for the uv led/heat-sink. This setup would also gives me flexibility if I have to go to plan B (a 100w uv led which is quite a bit larger than the 20w). 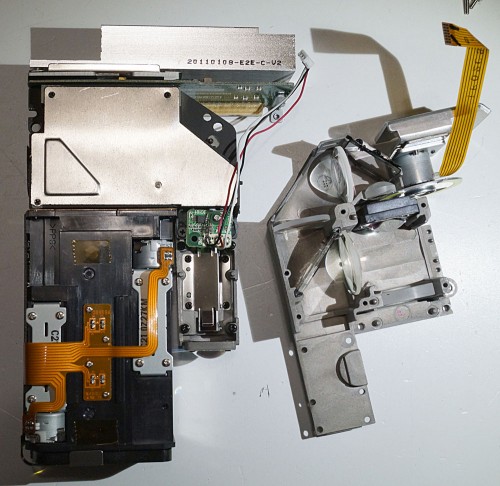 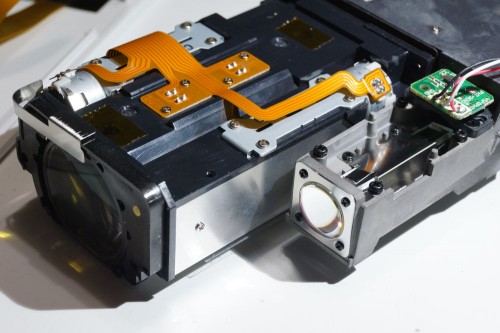 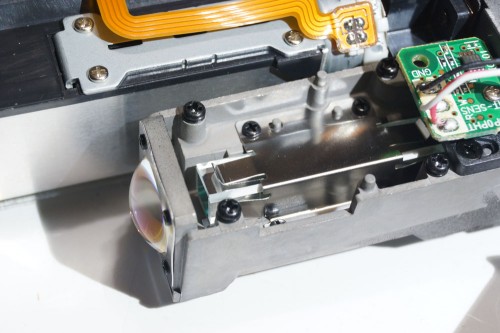 closeup of the light tunnel