One thing I have come to realize about this type of 3d printer is that what counts is that the build “face” (the layer that is being exposed), the vat floor and the projected layer image have a particular relationship to each other during the layer exposure.  Before each layer exposure the build face should be 1 layer thickness higher than it was for the previous exposure and the build face should not have moved in the X or Y direction or have rotated. The vat floor should return to the exact same position and be parallel to the build face for each exposure.  Between exposures the parts of the printer can twist and jiggle all they want as long as the build plate and vat are where they are supposed to be and settled down for the layer exposure.

If you look at my printer you see the vat/tilt and build plate assemblies are mounted on arms, not good for stiffness you might think but if repeatability rather than absolute stiffness is the goal having these assemblies on arms does the job just fine and makes the printer both easier to build and highly adjustable.

The z axis assembly consists of an adept linear slide scored on ebay for $60.00. The main reason it was so cheap is that it was an older unit that used a servo motor that required an absurdly expensive controller that you would be crazy to buy for an obsolete part. The solution, buy it and replace the servo motor with a stepper motor and get a matching timing belt cog wheel ($5.00 plus $15.00 shipping from sdp). the linear slide is attached to the “backbone” column (an old polaroid mp4 copystand, basically a large aluminum extrusion) with custom made polypropylene “clamps” that I fabricated on my cnc router. Attached to the linear slide carriage is another polypropylene part made on the cnc router that holds an aluminum extrusion horizontally that, in turn, another extrusion is attached to forming an elbow joint. The build plate assembly is attached to the end of the second extrusion. This configuration allows me to adjust the position of the build plate in relation to the vat considerably. 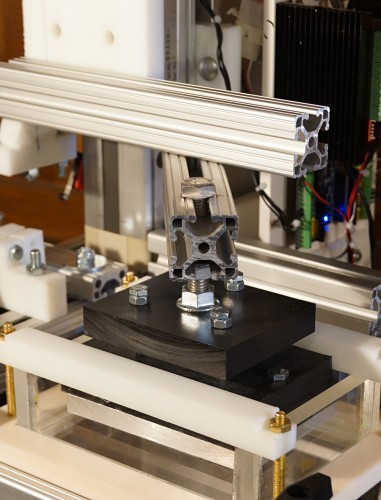 The build plate assembly is made to be relatively easy to adjust for parallel to the vat floor, it basically consists of a leveling foot being held in tension by three screws. Instead of trying to explain how it works I have a photo: 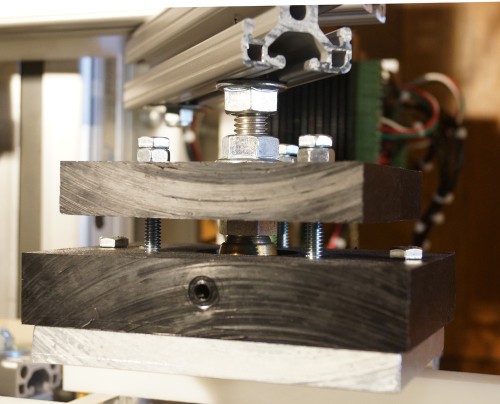 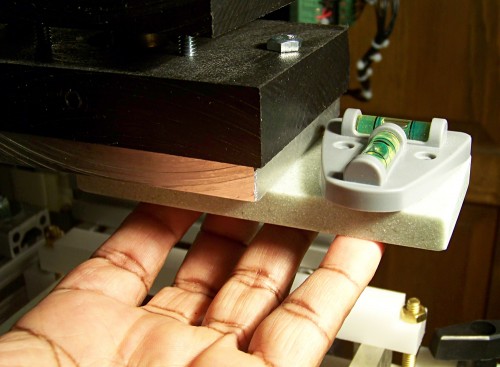 I also changed the build plate from corian to aluminum. Printed parts would attach to the corian so aggressively that after removing the parts from the build plate I would often need to refinish the build plate using a stationary belt sander. Parts adhere to the aluminum reasonably well but putting some time into planning part supports and wall thicknesses go a long way towards making successful prints with the aluminum plate. For larger parts I will also “paint” the build plate face with a thin coat resin and cure it prior to printing a part. This creates a surface that parts can better adhere to when being printed.