Probably the most interesting part of this printer is the tilt assembly so that’s where I will start.  The basic requirements of the vat tilt assembly is that it tilts with enough force that it is able to peel the “build face” of the part being printed from the vat floor and that after tilting it returns to the exact same home position for the next exposure. My solution to these requirements was to set up the vat and it’s tilting assembly so that it was held up against an adjustable stop using springs under compression.

The entire assembly is connected to the backbone extrusion via polypropylene clamps which hold an aluminum extrusion to which the tilting part of the assembly is connected via a set of custom hinges (made on the cnc router). Two of the four hinges have metal bearings that allow the tilting part of the tilt assembly to tilt easily with very little if any play. The mounting “arm” extrusion and the tilting extrusion are connected by the hinges in such a way as to leave a gap of roughly 1.5′” between them. On the facing edges of the hinged extrusions are plastic strips that have 4 – half inch holes bored partway through them and some bolt holes that are used to attach the strips to the extrusions. Compression springs are mounted in the holes and the compression of the springs push the tilting assembly up against an adjustable stop (which is used for leveling the vat). The reason there are multiple springs is adjustability, adding, removing or changing the type of springs allows for adjusting for the weight of the tilt assembly and vat.  You do not want to add more stiffness to the tilt than necessary because it still needs to be tilted by a motor of linited torque but there has to be enough stiffness to reliably return the vat to the home position considering the vats weight and the need to squeeze the resin between the build plate and the vat floor before the next exposure.

The tilt is accomplish by using a step motor with a short aluminum arm attached to it’s shaft at the end of that arm is a roller bearing, this arrangement allows considerable downward force to be applied to the tilting part of the assembly.  At the proper time the step motor rotates the roller bearing down against the edge of the tilt assembly forcing it down to peel the part from the vat floor during printing. To un-tilt the vat the motor reverses and the vat/tilt assembly un-tilts until it hits the adjustable stop (the motor reverses past the point where the adjustable stop prevents the assembly from moving higher).

The tilt speed and acceleration are adjustable in the arduino software. I like to set a tilt that starts slow and accelerates because many of the parts I make are large with large flat surfaces and a slow tilt allows the vacuum between the part and the vat floor to reliably break. I also wait until well into the tilt to raise the build plate, you do not want to raise it until the part being printed has been separated from the vat floor by the tilt because the part will snap away from the vat floor as if there were no tilt mechanism.  This tilt assembly works 100% of the time with 100% repeatability mainly because the way it’s built it has no other choice. 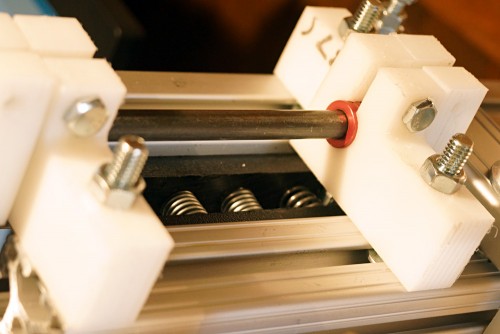 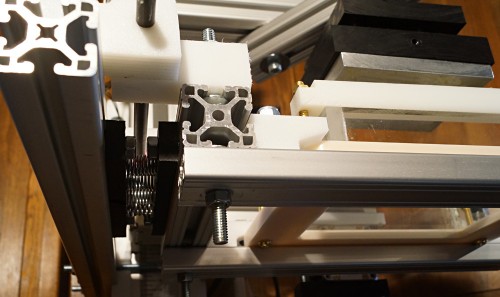 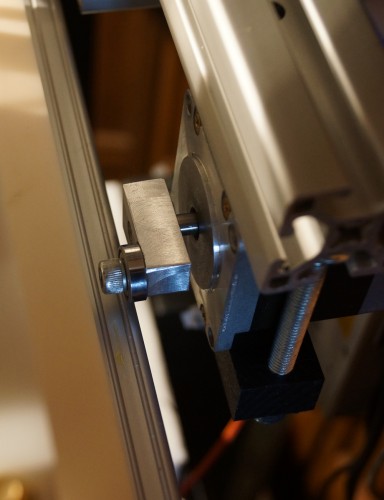 The vat is pretty straight forward, it’s your basic plexiglas walled glass bottomed box with a coating of sylgard 184 (I am going to try teflon at some point). It’s nothing fancy, the vat floor is plain glass (actually 5×7 picture frame glass) attached to the bottom of the plexiglas box with a thin bead of clear silicone sealant.  I do have that “box” sitting in a mounting plate that makes it easier to mount to the tilt assembly it also makes it somewhat easier to replace the vat floor coating and to drain and clean the vat. The Sylgard 184 vat floor coating is somewhat fragile and can be damaged easily but I have found that a thick layer of sylgard (3mm or so) is better than a thin layer not because the thickness makes it any less fragile but because a thick layer seems to have more stretch when pulling away from the part when the vat is tilting, it is also easier to remove when the coating needs to be replaced. 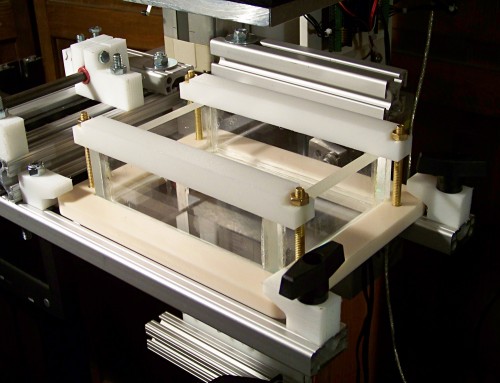